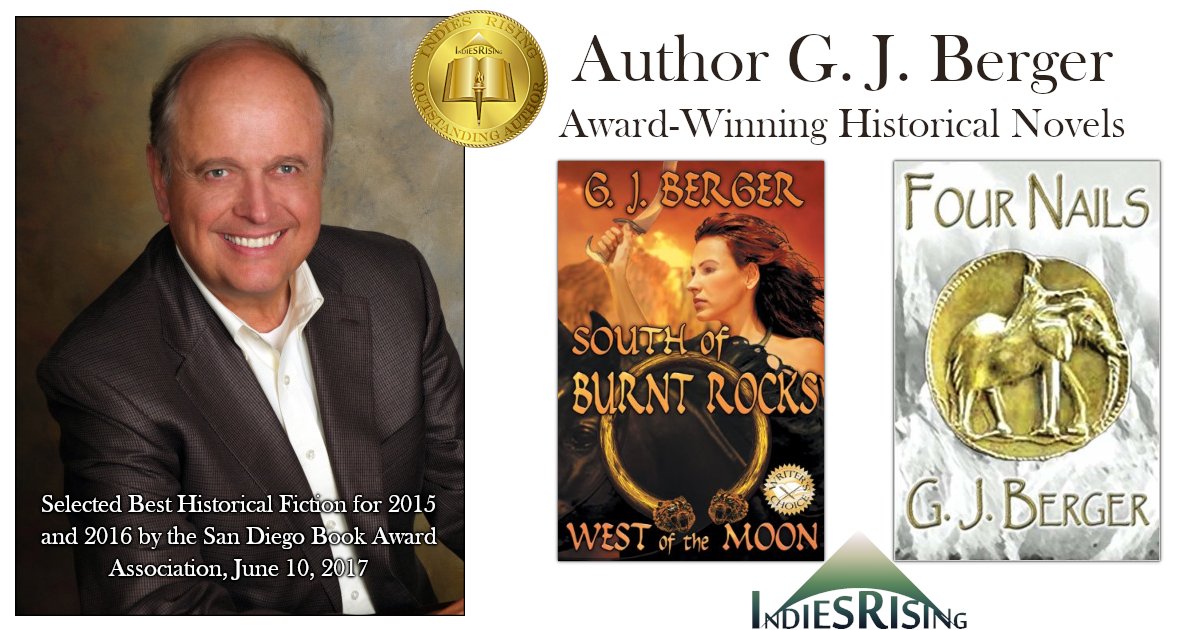 An author of merit with both of his meticulously researched, scrupulously written sagas winning much-coveted kudos and awards from prestigious organizations, G. J. Berger did it all himself with no help from big publishing, almost unheard of in the historical novel world. Though he landed prestigious literary representation just as I did, as is so often the case, good literature could not win influence among the top publishing houses because George was neither a celebrity nor a notorious criminal — hardly the latter. ( A nicer, kinder man you will not meet. I know, because he suffered through me doing his covers.) So, after years of postponing, waiting on word from the Big Five, he finally published his wonderful novels himself. I’m so glad he did so I can include them on this website devoted to outstanding independent authors. Meet G. J. Berger and his absolutely wonderful books! — D. L. Keur 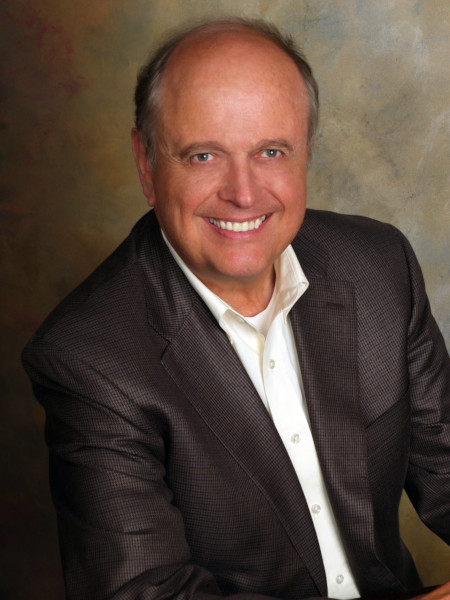 When G. J. was eight, his mom told him the story of Hannibal crossing the Alps with elephants and a great army. He asked her what happened to Hannibal after that. Mom didn’t know, but he was hooked, had to find out, had to write about it.

G. J. spent much of his young life on the road and at sea, even working as a crew member on a tramp steamer. Wherever his travels took him, old walls, canals, storage holes deep in the ground, made him wonder about how they got there, about the people who built them, how they lived and got along. The award-winning “South of Burnt Rocks West of The Moon” and the just released “Four Nails” bring to modern readers the lives and times of Hannibal, his elephants, and much more. 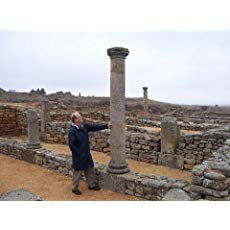 When not writing, G. J. tries to roam around the places he writes about, likes to sit and soak up the times back then and bring them to life in his stories. G. J. is convinced that for all the changes in last 2000 years, people loved and hated, suffered and rejoiced, destroyed and built our of the same urges then as today.

G. J. says, “I write historical fiction because the genre gives the reader an added ‘take away’ as only historical fiction can. Nothing else sweeps the reader into great tides of the past, into the lives of people who lived and loved, fought and suffered, laughed and rejoiced just as we do today — but differently too.”

“South Of Burnt Rocks” is the winner of best published historical fiction of 2012 by the San Diego Book Awards.

Awesome Indies posted a review of “South of Burnt Rocks” that stated in part, “Written with an engrossing breadth of detail about the Celts and the Romans, with a sympathetic slant towards the people on both sides of the conflict, and with a depth of knowledge that he imparts effortlessly to the reader, G J Berger has written a compelling story of adventure, fortitude, revenge and love. The main characters stand out against a supporting cast of well-drawn minor characters. Pacing is superb, driving the reader onwards. G J Berger’s writing style is direct and pared down, as befits a book of this nature. Descriptive passages are moving and show very well how the landscape is used in Lavena’s fight against the invaders, and the animals – horses and dogs, add an extra dimension to the story. For any reader who loves to sink into the distant past, this is a story that will not disappoint.”

G. J. lives in San Diego with his favorite grammarian and English Professor and tango dancing partner. They visit their two sons and grandsons as often as the kids will have them.

South of Burnt Rocks, West of the Moon 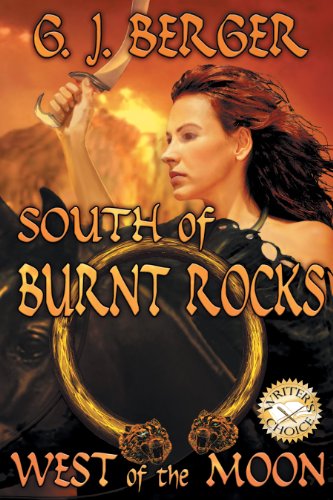 After three great wars, Rome has crushed Carthage. Now the undefended riches of Iberia beckon–gold, tin, olives, wine, and healthy young bodies to enslave. Burnt Rocks tells the story of Lavena, last child of the strongest remaining Iberian tribal leader at a time when Rome plunders and loots her land. She must grow up fast and use all her cunning and courage to survive each day. At times helped only by her father’s favorite dog, a special horse, or guided by spirits of the earth and sky, she strives to unite her people and oust the Roman menace. Based on real characters, places, and events, “Burnt Rocks” recreates that shadowy history–and eternal human nature rubbed raw.

“A young Iberian-Celtic she-warrior makes a stand against the invading Roman army. In Hispania, 184 B.C., 11-year-old Lavena, daughter of the village leader, witnesses the brutal murder of an old farmer by a Roman soldier. The villagers' worst fears are confirmed: Hungry for gold, mighty Rome has broken the peace treaty and is preparing to invade and conquer. A proud, determined people, Lavena's clan decides to train and fight against the overwhelming invaders. Lavena, now 15, has learned the ways of the she-warrior—women who use their strength and intelligence to outwit and kill their male counterparts.

“When the village is consumed by the crushing army, Lavena's father urges her to take the family gold and escape; his dying wish is for her to warn surrounding villages and unify the people to take a stand against Rome. Smartly written, the novel moves quickly, building prose with quiet strength unencumbered by the heavy style. Its bare-bones flow seems to fit the time period.

“The simple yet powerful narrative relies on a commanding cast of characters, many of whom are indeed women, celebrated for their resiliency and constitution. These women are the leaders of the resistance and they rely on no man for guidance. Berger beautifully crafts them as more than one-dimensional warriors bent on revenge. They're strong yet vulnerable, desperate to protect their land and people.

“A wonderfully crafted balance of Roman-era drama and the fierceness of battle.” – Kirkus Reviews

“A wonderfully crafted balance of Roman-era drama and the fierceness of battle.” – Kirkus Reviews

A well-drawn cast of Roman characters helps to flesh out the occupiers into conflicted and sometimes sympathetic counterweights to Lavena and her comrades, and the author’s short Notes appendix does a great job orienting readers not familiar with the time period . . . .

Berger does an excellent job of conveying the feelings of the characters as both oppressed and oppressors and really succeeds in bringing this time period alive. 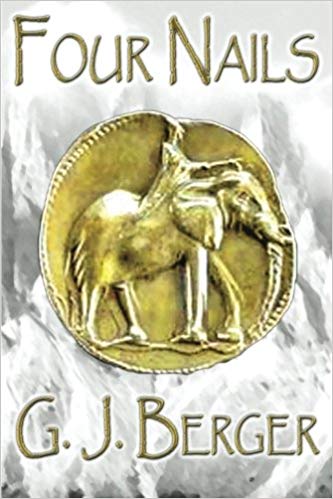 In ancient India, tragedy strikes a young elephant trainer. Forced into a slave caravan that takes him through perilous lands and into a world at war, Ashoka befriends a special elephant. He and that elephant, Four Nails, together lead Hannibal’s army over the Alps and down the back of Rome. Though a time of constant danger and uncertainty, Ashoka finds beauty and kindness while helping others enslaved for the pleasure of ruthless rulers. To survive this remarkable journey, the elephant trainer calls upon his unique ways with the great greys and a strength known only to those with nothing left to lose.

“Four Nails is a satisfying historical . . . a big book packed with history and adventure.” One of four novels recommended in “Pack-Your-Suitcase Reads”, Huffington Post, April 2016

“In Berger’s epic historical fiction, a young elephant driver from India fights in Hannibal’s army as it marches toward Rome . . . . A highly entertaining, sophisticated look at the Second Punic War through the eyes of an unlikely hero.”–Kirkus Reviews

“Berger’s unpretentious prose weaves a brilliant tale of heroism and cowardice, love and heartache through the special relationship between a glorious animal and its trainer.” — Sharon Robards, A Woman Transported

“This is an extraordinary and skillfully written book. It gives a real sense of being in the time period depicted. I never thought a book about an elephant handler would be so engrossing, but I found that I just had to keep reading. Anyone interested in the time of the Roman Empire would enjoy this book.” Awesome Indies, April 25, 2016

“The result is a fast-paced and richly entertaining new look . . . . The fact that the author not only manages to work in a love story . . . but also make it feel natural rather than forced is just an added bonus. Recommended.” Historical Novel Society Review, August 1, 2016.

The San Diego Book Awards Association honored “Four Nails” as the best historical for 2015 and 2016.

“Four Nails” is the prequel to G. J. Berger’s debut novel, “South of Burnt Rocks–West of The Moon.” That earlier novel won the SDBAA best historical award for 2012.